From North to South, the shoulder seasons, those between Summer and Winter, might be the most dramatic in the eastern US. When the plant world awakens from or prepares for Winter, movement in these sessile beings is abrupt, dramatic, and, best of all, colorful.

This movement is heightened a bit more in the North where the time it takes for leaves to unfurl or flowers to unfold almost seems overnight – no leaves to full-on leaves in 3 seconds flat. In the South, the initial burst of spring is sudden, but because of higher species diversity, it is also prolonged. I still recall my first few springs in the South. After a month or so part of me wanted the trees and flowers to get on with it. 22 years of Spring Training in the North reduces patience in the Southern Spring.

For some of these reasons, Autumn in the North is revered. When there are only maples, ash, and a handful of other tree species, the landscape explodes in joyous color. When you time it right – the best 3-4 day stretch in a superb year – the color is beyond belief.

Overlooking Fourth Lake in the Adirondacks in September 1995 [yes, I remember the year because when those color hit my eyes, the moment was set deep in my memory].

Don’t get fooled about autumn in the South. It is just as vivid. It just isn’t as concentrated in time. 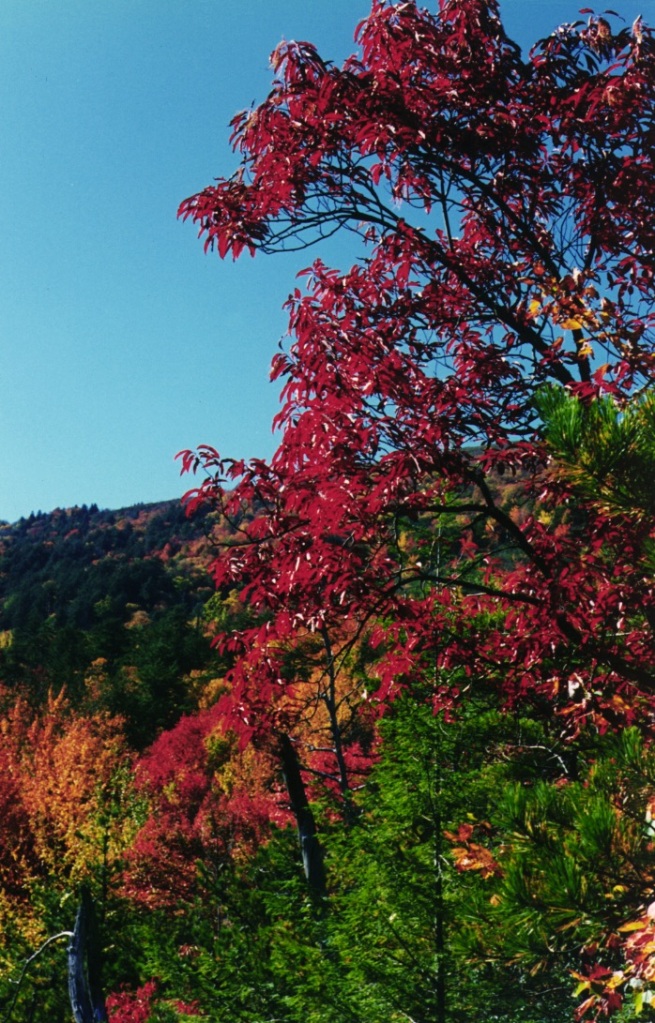 Early Spring in a Smoky Mountain heath bald. Early 1990s. Shot on AGFA film, which saturated reds and oranges. It was about those colors.

Same Heath Bald as the Spring picture above, but during the prior Autumn [1995?]. Shot on AGFA film, which saturated reds and oranges.

Autumn in the South is wonderful. The maples turn their colors. Hickories can be an amazing yellow. Sourwood [see above]. And on. Their timing, their phenologies, are different.

So, for these reasons it has been pretty fantastic to live firmly in the “Tension Zone” of the Northeastern US. Tension Zone, being applied here, is a take on John Curtis‘ coinage. Charlie Cogbill‘s initial witness tree study, where trees were used as markers or witnesses when surveyors were first mapping out towns in the US during the 1700s and 1800s, delineated the ribbon of forest from NY State through New England where more northerly and more northerly tree species comprise a rough mix across the landscape. North of this zone, more northerly trees dominate and vice-versa.

One can examine a variety of sources – spatial maps of pollen from lakes and wetlands over the last few thousand years to the “current” distribution of tree species [current = mapped/estimated distributions by Silas Little in the 1960s and 1970s] – and discern this zone. An update of Cogbill’s study using current-day inventories shows that, despite 200+ years of human land-use and the alteration of New England forests, this tension line is true.

Now starting my third year of living within New England’s tension zone, I can say it is extremely informative and fun. I now see three and a half seasons in the autumn season here*:

– Oaks and beech are mostly still quite green when the sugar maples peak in color. I do not have the exact timing down between peak Sugar Maple Autumn and Peak Oak, but I feel like it is about 2 weeks. No doubt it varies with the weather of that year.

The first two falls were pretty fascinating. After the Maple Burst, I found myself staring at the oaks and [sometimes] saying, “Get on with it already.” But, there is a sublime autumn between Maple and Oak Autumn. Straggler Maples, Premature Oaks, and a handful of other trees bridge the seasonal transition**.

As we reach Peak Maple 2016 here in Tension Zone of New England, I now enjoy that the zone is a nice blend between North and South. I enjoy having an extension of autumn.

Scroll through for some fine 2016 colors, including highlights of cool colors in some minor species.

* There is a fourth fall in New England: Hackmatack Autumn. Hackmatack in an old name for larch. A bit after the Leaf Peepers go home and almost all leaves drop, we can go out to our favorite larch wetlands and see the golden color they flash against the steely-blue later autumn sky. 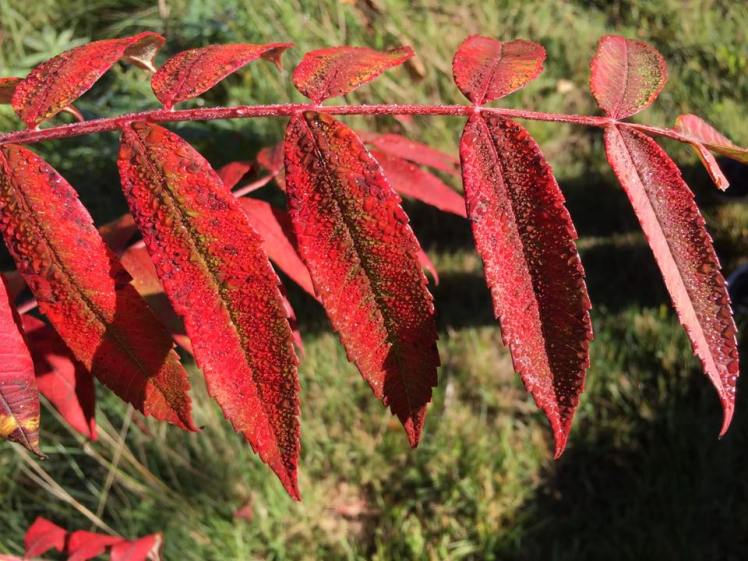 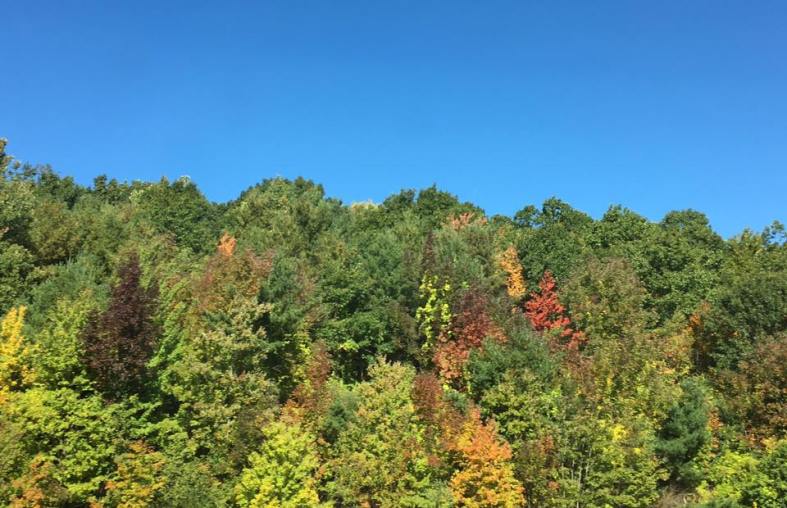 The dark burgundy or eggplant tree on the left is white ash.

A large, multi-colored [but much burgundy] white ash.ite

Can’t be autumn without sugar maples 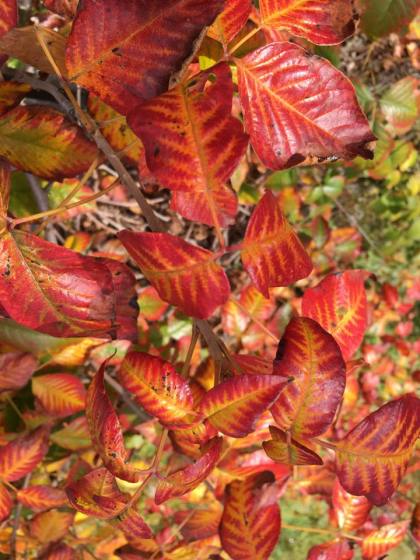