We all love the colors of autumn. Fall brings to mind the vivid reds, oranges, yellows, and deep purples of September and October. By November in the Northeast, the leaves are gone and the sky often tilts into various shades of pale grey. The weather can be bone-chilling in a damp kind of way. It can be a bad time to be in the field. November in New England was the closest I’ve ever been to hypothermia. I now relish fieldwork in November, however, because of its light. November Light has helped me see things in a new way.

The first time I experienced the long-lasting glow of November Light was late in my dissertation field campaign. I recently had some great luck with a collection from an old-growth forest and wanted to see if I could squeeze out a few more diamonds before I called it a dissertation (and work would be lit by fluorescent light).

Kevin was my most reliable volunteer field assistant. I could call at a moment’s notice to see if he wanted to hit the field. He always said yes.

We bolted to southeast Pennsylvania and the weather was on our side. Blue skies and warm temperatures. We scoured this tiny patch of old forest to see if I had missed much on a prior trip. Soon after a brief lunch, it became apparent that we had done about all that was possible in that forest and we were slipping into lazy. So, we leaned back, chatted, and stared at the vernal roof.

At some point I kept checking the time on my GPS. My eyes kept telling me it was getting late. In reality, it was just approaching mid-afternoon. It dawned on me that angle of the Earth in that part of the Northern Hemisphere was delivering us an ever-lasting gobstopper dose of diffuse light. It felt like “sunset” above the Arctic Circle during summer. The light was low and hitting at all kinds of slanted angles. Colors glowed. It was glorious.

At the same time, it dawned on us that we were south of the last glaciation. Elk, woolly mammoth, and other megafauna likely used the game trails we were using that day more than a 100,000 years ago. More glory.

Just this past week we rolled up our field tapes for the last time during the 2014 PalEON season. It was a glorious feeling. Putting in ecological plots for tree-ring analysis is long and rather repetitive work. It is exhausting in a deeply different way than to reconstruct climate from tree rings. It was nice to know we had done a ton of work this year and that we were done. I imagine farmers get these feelings this time of year, too. As I dropped a coiled field tape into a backpack, it was instantly satisfying. We were putting our loyal field equipment down for a long winter’s rest.

We scheduled this last field campaign more than a month in advance. It is risky scheduling that far in advance in central New England this late in the year. But, after a Nor’Easter and a cold snap, the atmosphere shifted in our favor.

While installing ‘nests’ around an older plot, or as a rather poetic colleague termed it, installing ‘doughnuts’, I ‘discovered’ a new species. Of course, black oak (Quercus velutina) was always there. It was just not talked about as much and, being hard to identify and often hybridizing with northern red oak Quercus rubra), it is often put in the red oak category. But, there it was, right in front our eyes.

Perhaps it was the November Light that made it ‘appear’? Maybe it was the showering of diffuse, angled light that made black oak jump out of the forest. Whatever it was, I now saw black oak everywhere. It wasn’t, of course. It was often red oak borrowing some of the velutinous traits of its sleeker, rarer cousin.

The glorious nature of November returned this past week and I saw these forests in a new light. 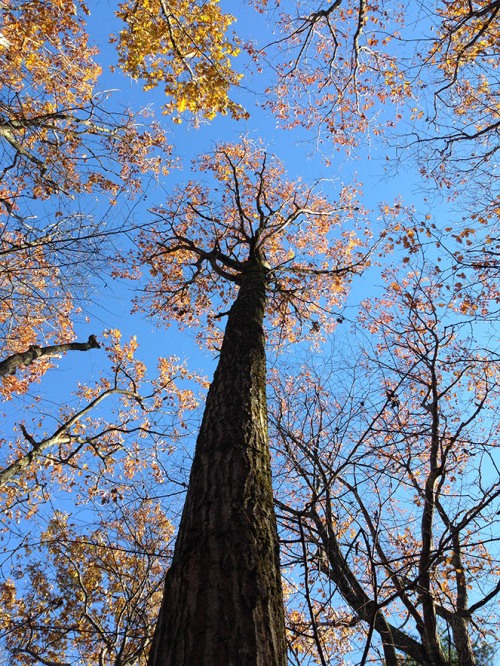 Oh, there are some conifers in this forest (Pinus strobus). Photo: N. Pederson

It comes in bronze, too. Photo: N. Pederson

2 thoughts on “In a New Light”